You're my guilty pleasure, sugar, baby!

Sex and sugar consumption were the pleasures which dominated my first 24 hours in Ann Arbor. Unfortunately I wasn’t part of any of them:

Apparenty I had just checked into the “Hoetel”. Before I had even taken off my shoes I heard a couple making distinctive grunting and moaning noises from behind the paper thin walls of my room. I mean they could have been working out in unison but I don’t think you have to agree as much as they did during a work out.

I thought it was a little creepy listening to them having sex so I went out to the huge outdoor shopping mall Arborland to grab some dinner. Food is a huge deal in the US and probably all of you think ‘Food’ when you think ‘America’. And that’s right. Food will be one of the biggest differences between Germany and the US so there will be a lot to discover. Let’s get into this for the first time then, ready? Here we go:

Five Guys is a burger joint. You can put together your own individual burger and no matter how many ingredients you put on there – for free by the way – your burger will be huge. If you want to get fries with that you should!  Even if you don’t want to you should! Five Guys fries are fried in peanut  oil and the oil adds a weird but fantastic taste to it. I had a cheeseburger ‘all the way’, which means that I choose all available ingredients and when I was done I was DONE! 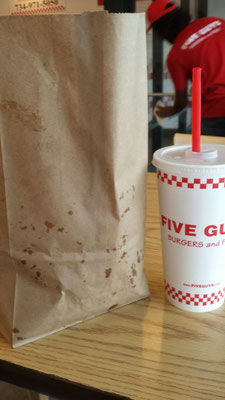 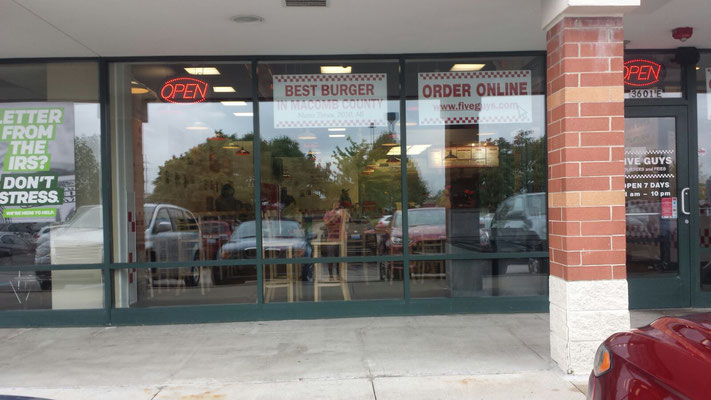 Let’s move on from food to food now. After I had spent a mediocre night at the hoetel  - my neighbors were having sex again and to my very desperation my downstairs neighbors were at it too – I made my way to Target to get some groceries. Since all the obese people around where a great motivation for me to eat healthy, I decided to take advantage of the nutritional training I had received from my bodybuilding ex-roommate. For my 8 month in America I would try to follow these very simple rules:

1. No processed foods (Frozen lasagna, prepacked sandwiches, and so on)

2. As little industrial sugar as possible (that stuff apparently kills you)

Obviously I can’t and don’t want to follow these rules 100% but I’ll try to obey them as good as possible and keep you updated about it.

Back at Target, I was looking around  for a yoghurt. Many of the yoghurts seemed to be labled “low fat”. In fact, I didn’t find a single yoghurt which wasn’t labled “low fat”. Obviously I didn’t want a low fat yoghurt because usually industrial sugar is substituted for the fat. Indeed all yoghurts held at least 15 grams of sugar per cup. That is a lot! And some even contained up to 30 grams per cup. There was a tall sign stuck to the cooling shelf holding the yoghurts: “Choose well”. If I chose well I wouldn’t be choosing any of these death traps! What kind of nutritional education is that?

Anyway, why am I telling you this super lame yoghurt story? Well, turns out the yoghurt wasn’t the only good to fall victim to the  exorbitant use of industrial sugar. Cheese, cereal, milk, tea… I was shocked when I couldn’t find ham (yes, I said ham) without added sugar. Eventually I found ham without added sugar, but it cost me $4 for only 200 gr. When I checked out, the cashier looked at me incredulously. I don’t think he had ever sold any of the items I had bought.

I don’t know if it’s just Target or all american grocery stores, but I will keep an eye on this sugar phenomenon.

Later I took the bus to Ann  Arbor – the hoetel was a bit outside downtown – to meet a german friend of mine. Maria was going to be enrolled at the University of Michigan too. We walked around town, had a talk about everything that had already happened since we left Germany and we even tried on some rad U-Mich merchandise: 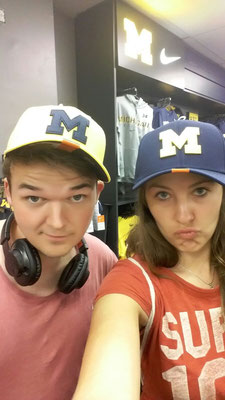 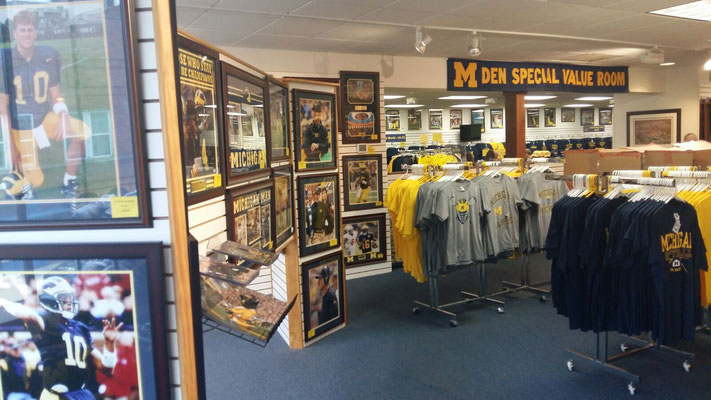 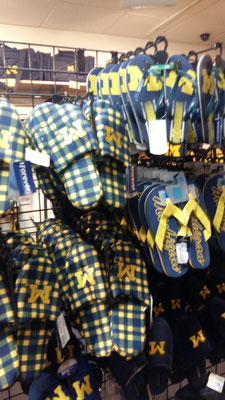 That was fun! A couple of hours later I took the bus back to another sleepless night in the Moantel – alright, there’s another one – and as I thanked the bus driver upon disembarking he said:

I smiled back at him and answered through the closing doors:

Tomorrow’s the start of our orientation programm. I’ll let you know how it went down!