I'm on the internet again.

You probably noticed I didn’t have sufficient access to the interweb for the past couple of days. We figured it out with our landlord and recieved two pizzas as compensation... Well I am back and I have a lot to tell you! Let’s go for it:

Plodging through the newbie fountain made me the wolverine I am today, plus I will join the squirrel feeding club. Yes, that’s a thing!

So orientation started on Monday, right? WRONG! A completely new, unforgettable chapter of our life started on Monday. At least that’s what the presenters at our welcoming celebration told us over and over again.

After I checked in to the orientation programm and received all the documents and studying resources I would ever need, I went to pick up my M-Card. What is an M-Card you ask? It’s a piece of plastic with a magnetic stripe on the back and it looks very similar to a german debit card. It’s just so much more. It’s my personal key to the University of Michigan. I can enter any building at any time, I can ride the bus for free, I can get into sporting events for free, I can rent out books and DVDs for free and I can withdraw money on selected ATMs for free. I can even get a “Saferide” at night, which means that I can call Campus Police and they will send a car to pick me up anywhere on campus and drive me home for free: Sweet! I’m going to use that everytime I’m drunk. So never! (Love you, mum)
Because I am who I am - namely an idiot - I send in the most ridiculous photo of myself I have ever seen to be printed on the Mcard. I look like a prick:

Anyway, countless presentations on how to get around campus followed and the theatre group had even rehearsed a hilarious play addressing the issues an international student may encounter in every-day-life.

We had to learn the university anthem which included us singing the text and making the appropriate gestures at the same time. It was quite confusing. Especially for Germans raising your right arm while shouting out “Hail!” is kind of awkward. It felt wrong and it still does. Maybe time will get me comfortable with this sort of patriotic tradition.

A couple of U-Mich students showed us around campus later on and we had to walk through the fountain of newbies. Every new student does it and apparently it’s good luck! Of course I was the only one to get my shorts wet because I'm a clumsy baboon. By the way, should I be concerned about the looks that dude to the left gave me? Is he in love with me or is he just going to kill me and my family? Help me out, guys.

“So, what language do you actually speak in Germany?”

Michael, the slow australian guy, how he shall be called from here on forth, had outdone himself with this moronic question at the house party on Monday night. Naturally we told him that Germany was a vast landmass with a massive dessert in the centre of the country and a few people living around the borders speaking nothing but English. Unaware that he had just received a description of his home country, he nodded and had a thoughtful sip of his non-alcoholic beverage (he is underage so that’s why he was drinking cranberry juice all night long). This happened at my first american party ever!

I did some wasted virtual reality at some nerd fraternity, too. It was mindblowing! I don't know whether it was the alcohol or the game but it certainly was awesome:

Two more partys followed on Tuesday and Wednesday. It’s welcoming week in Ann Arbor and there are heaps of partys every night. The fraternities and sororities put up swimming pools, beer pong tables and one even had a bounce house in their front yard. As a quick note I’m going to have to explain the status of fraternities and sororities at this point: They aren’t as frowned upon as they are in Germany. That’s owed to the fact that they’re providing a service. They’re making it possible for freshmen, sophomores and juniors to party by giving them beer and liquor, since the legal drinking age in the US is 21. I don’t think I have to mention that this law is completely ludicrous, especially when compared to other laws. Let  me give you an example: On your 18th birthday you can cross the street, enter a gun shop and buy a semi-automatic riffle. But should you be holding a beer while crossing the street to buy a gun, you’ll be arrested on account of underage drinking. What. The. Fudge?

On Tuesday I went to an arcade with Maria and her friend Cathy: 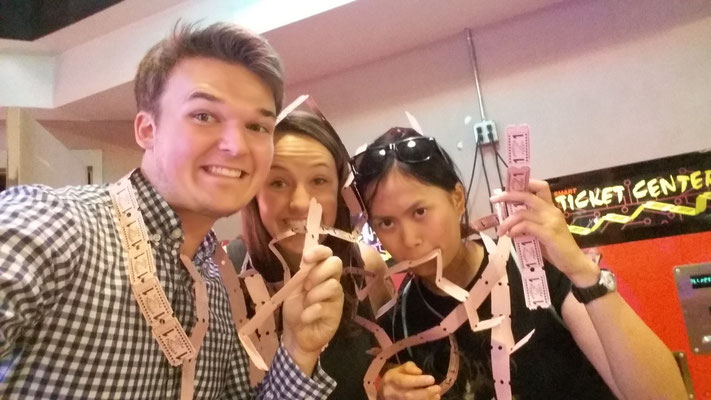 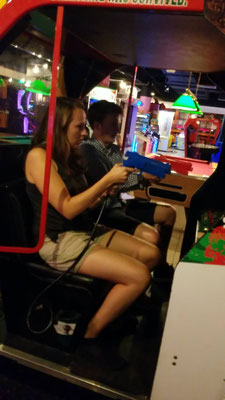 Arcades are immensely fun! I could waste so much money playing pinball und air hockey. Fortunately, we left before I went broke and decided to go for some karaoke. Singing “I want it that way” by the Backstreet Boys, much to my  chagrin I realised that my sisters were lying when they said I was a gifted  singer. They probably said it to prevent my heart from breaking but I ended up walking the earth thinking I was a rockstar which I am not! It was a fun night though.

The money I had spent in the arcade luckily didn’t hurt me too much because I didn’t have to pay for food for three straight days! There was always free food around. The university isn’t exactly on a budget. With more than seven billion dollars to spend every year, the University of Michigan is one of the best funded educational institutions in the world. Hence, a ridiculously high amount of free food! They have Subway, Wendy’s, Panda Express, Starbucks and a whole lot of other shops on campus and when me and a few friends were walking around campus one night, there was some kind of event going on and all the shops were completely free. You could just get loads of free food! I had a massive Wendy’s burger with large fries and a diet coke, because let’s face it, regular coke makes you fat!

On Wednesday I led my team to victory in the scavenger hunt the office for exchange students had planned! We won some sweet U-Mich merchandise:

On Thursday I moved into my permanent room! I share the small house on Woodlawn Avenue with three guys: Alessio, Trent and Woitek. Alessio is from Italy and just started his PhD programm at the U-Mich. Trent is American, just graduated Berkley and works in consulting now. Woitek is a graduate student in european history and originally from Poland but moved to the States when he was 12 years old. They seem like cool guys and I’m sure we’re going to have a good time once we get to know each other.

I bought some furniture for my room as well: I got an air mattress and some fancy pillows, bed sheets and covers. It almost looks like a real bed now. On the box of the air mattress it said that it contained a  chemical which can be harmful to humans and might cause birth defects, but only the state of California had issued that warning. Good thing we’re in Michigan then, where the chemical apparently isn’t harmful!

Below you can find a few impressions of the house. It's much less dirty than it was in the pictures provided by the owner, it's still kind of rancid though, but I guess that's just american.

The University of Michigan and the whole of Ann Arbor are crazy about sports! They have one of the best college football teams in the states and they  enjoy watching sports in general. They go absolutely mad when there’s a game in Ann Arbor. We were told that we’d be required to wear maize (a shade of yellow distinctive to the U-Mich logo) to all sporting events. And they were ridiculously serious about it!

“If you don’t wear maize, they might not let you in, you know” we were told. Their sudden seriousness was weird since they had been so chill about everything else so far. You guys know me quite well, so I’ll probably show up wearing a red t-shirt on game day or something because I forgot about the maize. But I’ll try to get into at least one game. Their football stadium – they call it the “Big House” – is the largest football stadium in the world. It’s capacity exceeds 110.000 seats.

The first game day is today but I won’t be going because ticket prices were getting out of  hand. I’ll be pregaming though (that’s what they call getting drunk before the game). They start drinking at 7 am because the game’s at noon and people only go to the stadium after inflicting excessive intoxication upon themselves since there is no alcohol allowed in the stadium.

I’m going to end this blog entry right here because it’s quite long already. There will be a new one quite soon! Now that I can access my homepage again, it will be a lot easier to update it. I hope you guys enjoyed this blog entry. In the next entry I’m going to tell you how the U-Mich football team did in their first game of the season against Hawai’i!