Welcome to the club now, everybody's up now.

I’m going to join U-Mich radio for some football expertise and squirrels use the crosswalk here.

When my last class of the week was over at 5 pm on Friday, I stumbled upon something so american on my way across campus, I thought I had walked right into a teenage-college movie. They call it Festifall. Clubs had put up their promotion stands and were trying to convince hundreds of students to join their organisations. 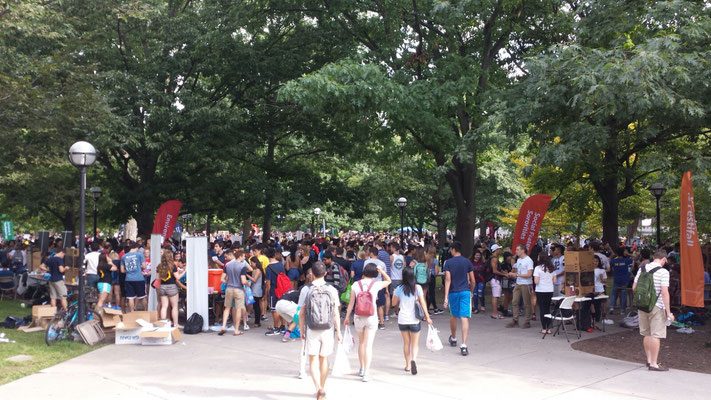 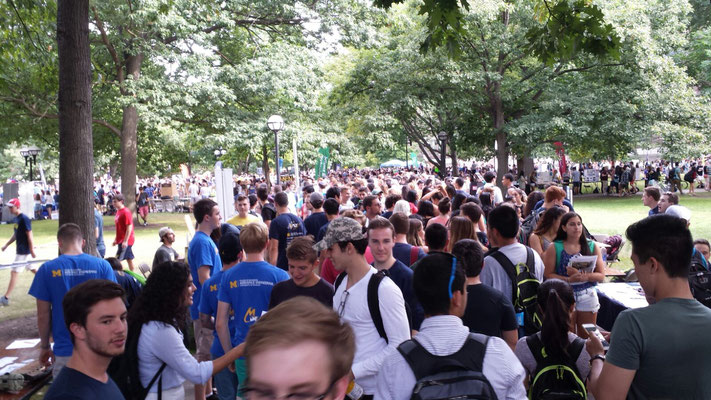 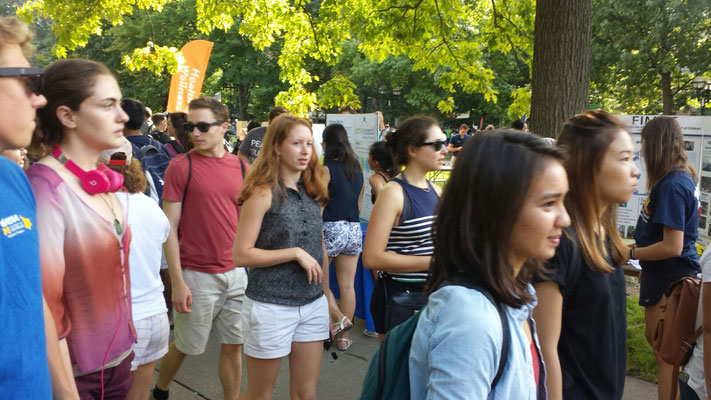 U-Mich has a total of about 1,500 student organisations so there was something interesting for everyone. From a Pokemon Union over the aforementioned Squirrel Feeding Club all the way to a Legalise Marihuana Association. There were sports clubs, academic clubs, charity  clubs, religious clubs, cultural clubs and so many more. I was curious to find out how many people would try to win me over  to their cause. I turned off my music, put my headphones in my backpack and started squeezing through the masses.

If anybody feels like they don’t get enough attention, they should be sent here for therapy. I hadn’t been approached so obtrusively since I told my extended family about my first girlfriend on Boxing Day a few years ago. I was molested, I was screamed at. It was like I was back at a malaysian flea market. I had my behind grabbed by a girl from the U-Mich Association for the Prevention of Sexual Harassment, just so I would notice her. I didn’t join but I bathed in the attention. I loved it. Everybody wanted a piece of the M-Dog!

At orientation we were warned not to sign up for too many newsletters since every organisation usually sends out two mails a week. If you were to sign up for twenty organisations that would add up to 40 mails a week or more than five a day. Hence, I was careful about what I signed up for. Eventually I left Festifall having signed up for six newsletters. I also filled out two applications for paid blogging positions and send in some of my work, so let’s see how that works out. They will let me know whether I got the job or not around early October! Last but not least I will join U-Mich radio soon, hopefully commentating several football games. I’ll keep you updated about that as well.

My first Chinese exam was due on Saturday. I had prepared myself and sat in front of the computer in our dining room. Just as I had commenced the online quiz on comprehension of pronounciation, Trent and a few friends entered the living room. You could tell they had had a few beers and they were absolutely excited to meet me. As nice as that was, I kept glancing at the quiz-timer running down while all of them came over to shake my hand. But before I could tell them about the test, they had already left again, so I could redirect my attention to the quiz. I didn’t do too bad. I scored a 12.6 out of 15 which is a B+. The fact that I was not completely satisfied with this grade is proof that by learning Chinese a little part of Asian mentality is transferred to ones value system. I’m afraid of ending up as the guy who goes into revision on his final paper because he “only” got an A. I don’t want to become an overachiever! Maybe I should add Spanish to my schedule then… I’m just kidding the Hispanics of course. But I really need to find back to my laid back attitude as soon as possible.

I could start that process by joining a sports team. I was invited to one by a buddy. Our team’s name is Man Chest Hair United. Seems like the perfect team for me. Not because I have manly chest hair – if only – but because my teammates would too have the sense of humor of a seven-year-old. Great! Later I found out that we were playing a lot of great and internationally acclaimed teams: Juventus Urin and Fake Madrid were only two of them.

On an unrelated note; did you guys know that squirrels are really tame here? And they’re smart, too. Here are several pictures of Maria – you remember her, right? – luring a squirrel over to her, just to jump up in fright when it actually responded to her efforts: 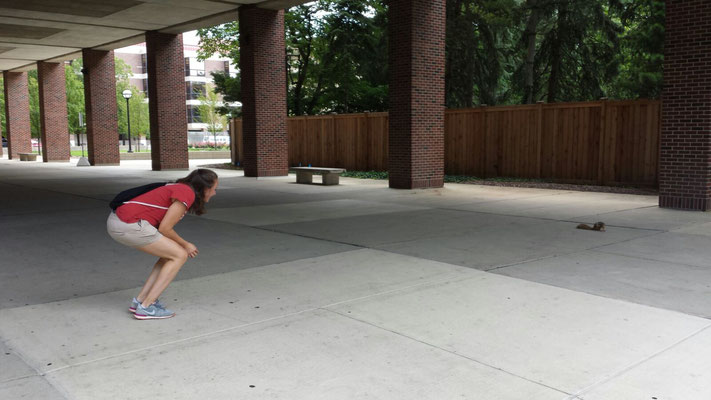 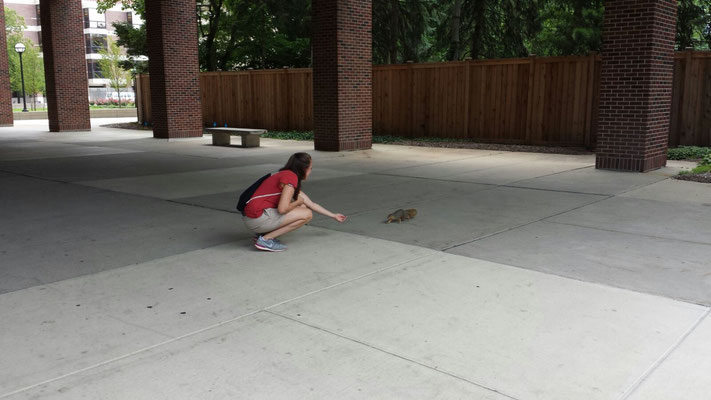 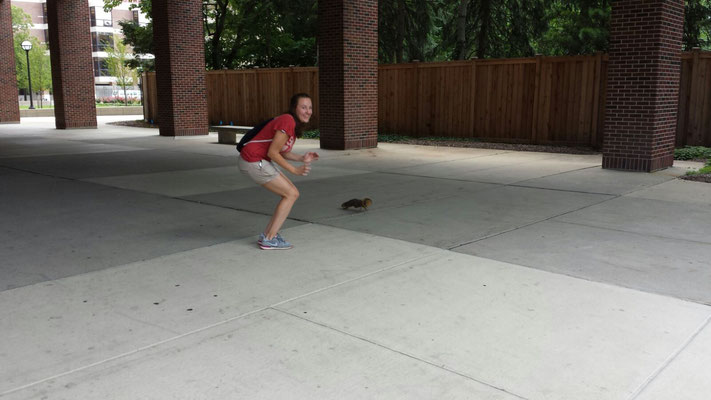 Because squirrels aren’t just smart but notorious for their deadly snuffle-attacks as well. Anyway, squirrels are actually smart enough to use crosswalks, which they do on a regular basis. For the second time this week, I witnessed a squirrel waiting for humans to approach a crosswalk, to then hop on over to the other side of the street once the traffic had come to a halt. I find that incredibly intelligent. Unfortunately I didn’t get that on camera, but I will try to and if I do, you’ll be the first ones to see it.

Just a quick update on my house: It’s growing together. We’re all getting along really well and we’re starting to form a proper community. We watch sports together, we discover each other’s preferences in music, film and politics and we talk quite a lot. I actually found out what the infamous american greencard looks like today. My polish housemate’s family moved to the US when he was 12 years-old and he didn’t feel like applying for a full American citizenship yet, so he still has a greencard. Check it out guys:

But that’s not what he looks like at all. Just to give you an impression… This is what he looked like tonight after a productive day at uni:

Well guys, that’s pretty much all that happened. It’s been an exhausting first week. Bring on the second week now!