It's getting hot in here, but then again it's cold.

As I stood behind the stage, all cameras pointed at me, the speaker started talking about the importance and bravery of the military. I inevitably thought of Donovan's "Universal Soldier" and that "he really is to blame, his orders come from far away no more" and that he's "fighting and he thinks he'll put an end to war this way". As my thoughts drifted off with the speaker still babbling along, my face did what it always does when my brain has to focus on more important things than controlling my facial expressions. It made me look like a human-fish hybrid, being annoid and offended at the same time. Just seconds after starting to look stupid, I was pulled back into reality by a steward hissing at me. I had done it. I had looked dumb on national TV yet again. As a matter of fact I have a talent for looking dumb anywhere, anytime and in any way but it mostly occurs when I am filmed or photographed.

Indeed, I had only been brought back here to cheer at everything Tim Kaine, member of the US senat and vice presidential candidate under Hillary Clinton, said. And I wanted  to be part of the cheering squad so badly. As he finished his talk on the military, everyone cheered. Except for me. I just shook my head in disagreement and the steward who had asked me to come back here clearly regretted his decision already. He got ready to remove me from the cheering squad, but luckily for me, Kaine started saying things that made sense and I could agree to. I started to join in to the cheering and I went completely nuts. I mean: COMPLETELY nuts. The steward - who had shown signs of relieve when I finally started being excited - was blatantly unhappy with the poor choice he had made when appointing me part of the cheering squad.

But seriously, Americans get very excited about political rallies. It might correlate to their inexplicable admiration of celebrities. Maybe they're just better at showing their emotions and political attitude than Germans. I'm not sure, but their exaltation is quite sweeping to be honest. Accordingly, I had a blast at this rally. And so did everyone else: 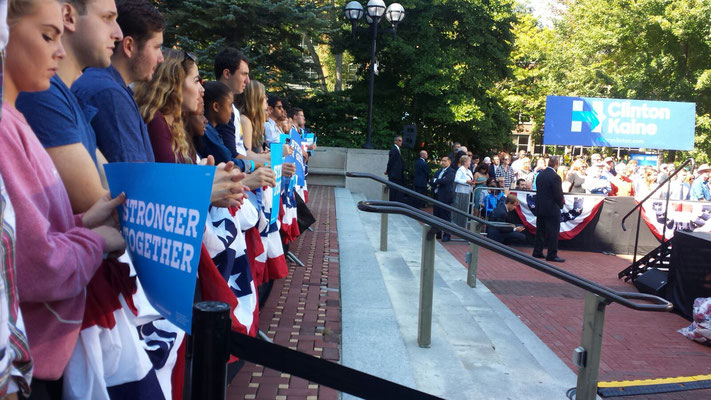 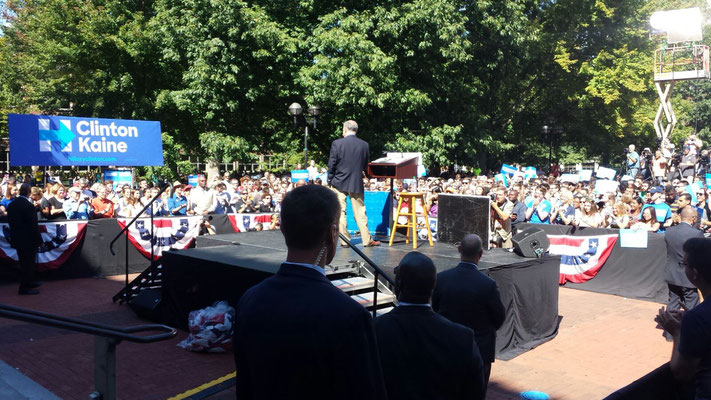 I don't think the pictures gave you an accurate idea of how cheery these folks actually are, so I'll post a video below. In comparison to Germany it is absolutely mindblowing:

In other news, I had to self-pitch on Tuesday. What does that mean, you ask? Well, a pitch is telling a person or a group the most important facts about yourself, tailored to meet the person's or the group's expectations, or more accurately their requirements, in the shortest time possible, in a way that makes them listen to you. All students of Prof. O'Day's class - remember Prof. O'Day, the only professor on campus who dislikes exams and won't have them for that reason - had to pitch themselves in order to be accepted for the course and find a group to do their next pitches with. My pitch went... brilliantly! Check it out:

"Once you leave your home country you’re exposed to unknown traditions, new ways of thinking and shifted priorities. Agility, versality, and open-mindedness are crucial to survive in an ever-changing environment.

After more than three years of intense forging, the world has taught me these qualities to a certain extend and my pursuit is to improve them constantly for you can never master them. The world has started to make me an all-rounder.

Much like this cookie here *shows a cookie*. This cookie is an all-rounder, too. First of all it’s ALL ROUND. And just like me, it’s got all the important qualities of an all-rounder: It’s firm on the outside, smooth on the inside and once you tried it, you can’t get it off your mind.

I like to consider these small chunks of chocolate in here my small bundles of experience. Like Prof O’Day said, you don’t have to be super smart, or super cute, or super funny. And thank god he’s right because I’m neither of those things. But I do have a lot of chocolate chunks. And that’s what makes me a great all-rounder.

On the one hand I’ve worked for BMW, on the other hand I’m an unpaid Art-Blogger.

I strive to bring this variety of chunks to you, just like I’m going to bring these chunks of chocolate to you in just a second. But I’m going to need you to give me some of your chunks in exchange, so I keep on improving myself, to be as flexibly deployable as possible. If we combine our chunks and dough, we can achieve anything!

Because a little bit of everything is better than a whole lot of nothing.

To my very relieve my fellow students laughed and some of them - and I feel very honoured by this - came up to me after class to congratulate me on my pitch. Nothing could possibly ruin this day! Or so I thought...

Then came Buffalo Wild Wings or "B Dubs" how they call it out here. Now, don't get me wrong. There is nothing wrong with B Dubs. It's just that sometimes I make decisions without thinking about the consequences. And at B Dubs I did it again. Maria, a few friends and I were just sitting at our table, having a drink and talking about student life. When the waitress arrived, everybody appeared to have decided on what to eat already. Because I hadn't even looked at the menu yet, I  just ordered the next best thing. About thirty minutes later I would find out that that was a big mistake.

When the food arrived the  waitress asked:
"Who ordered the blazin' sauce wings?"
My friends, who had been deep in vivid conversation up to this point, suddenly stopped talking to look around the table with a startled look on their faces, to make out who's order - or should I say who's mistake - this was. Alarmed by their looks, I reluctantly raised my hand.

Tears started filling my eyes as the vapour of the wings ascended to my face. Apparently blazin' sauce was somewhat spicy. How spicy? Well, you guys may or may not have read my travel journal about Malaysia, but the malaysian soup catastrophe from 2014 comes quite close to the pain I was about to experience.

Just to recap: In Malaysia I confidently ordered a spicy soup, even though the waiter had warned me repeatedly,  that the soup I was about to order was EXTREMELY spicy, even by malaysian standards.
"I'm fine!" I said imperturbably.
A few minutes later I tasted the soup. After I had swallowed a spoonful, my entire throat was paralysed, so pretty much all I could do to pretend I was fine, was to give the waiter - who had patiently waited beside my table to examine my reaction - a thumbs-up and go for a second spoonful. For the first time in my life, I would rather have had a smaller portion. After twenty massively painful minutes - the waiter had been nice enough to provide me with a stack of napkins and increasingly sympathetic looks - my bowl wasn't empty but I had reached my limit and swore never to overdo the spiciness again.

But it looked like exactly that had happened. But this time it wasn't the waiter who gave me pitiful looks, but my friends. I'm going to make it short: It wasn't as bad as the malaysian soup. But one thing surprised me. All of my friends tried the blazin' wings too and I whined the least, although asian people were present. I could take spiciness better than asian people... Awesome! 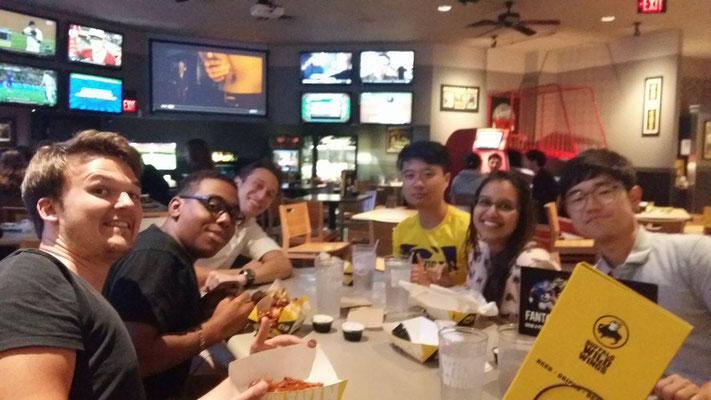 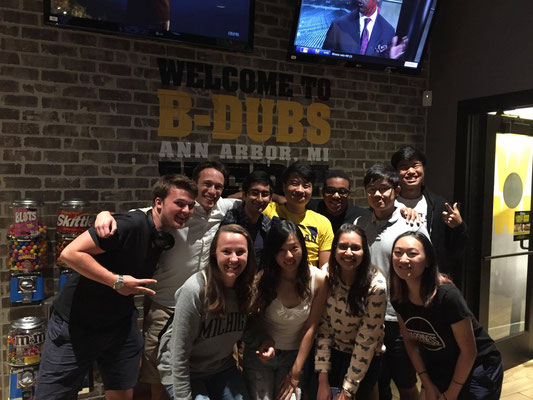 At home I was asinine enough to put my fingers - which I had washed a couple of times, by the way - into my eyes. The pain was indescribable. For about ten minutes I thought I could never open my eyes again, but as quickly as the pain had hit me, it vanished. After that it felt like I hadn't closed my eyes in days, so when I went  to bed I fell asleep quicker than usual and I slept better than ever.

Until I was woken up by my freaking sorry excuse for a bed! As you know, an airbed was my budget solution for a bed. But here's the catch: Since I like to sleep with my windows open, cold air creeps in to the room at night, which isn't a problem unless your fudging BED IS BASICALLY PLASTIC-WRAPPED AIR!

I was awoken by my mattress sucking the warmth out of my body, right into it's greedy core. I had only once been awoken by the cold. Back in New Zealand when I accidentally brought a children's indoor tent on a three day hiking trip with nightly temperatures of 3°C (America, get used to the metric system already) and lower - you see how I do stupid things sometimes?

Anyway, it didn't feel too good, but I went out and bought a decent padded bedcover today, so that should do the trick.

I just remembered: I was given a chinese name by my chinese professor. A shanghainese friend told me it meant "bright and smart". Considering the past proceedings I mentioned in this blog entry, I should probably give the name back and request a more fitting one, right?