So let's all drink to the death of a clown!

As you know I had a lot of bad luck lately. Superstitious people may think that’s because I said that if Jesus had spent more time working out and less time walking around transforming wine into water, he wouldn’t have had such a hard time carrying his cross. Others might instead believe that god allowed himself a joke when creating me in the first place.

Fact is, I’m not too lucky at the moment. Why do I bring this up again? I lost my external hard drive. I lost my external hard drive and with it all of my data, including the extensive nude picture selection of myself, entitled “Nacktheit im Freien”. Ok, I’m kidding about the nude picture collection - it didn’t have a title yet - but I did lose all of my data’s copies. At least I still have them saved on several other devices. So to all of my Ann Arbor friends: Please be on the lookout for my hard drive. It’s the one that looks like all the other hard drives, so it should be easy to spot!

Oh yeah and one other thing concerning my luck… there are freakin’ armed clowns running around the States:

A few days ago they were first sighted in Michigan and last night there were two armed robberies right here in Ann Arbor! For all the people who don’t know me very well: "Terrified" doesn’t even begin to describe my attitude towards clowns. They are so creepy! Why in the name of the lord would you have to draw a smile on your face? The only reason I can think of is that YOU’RE A FUDGING PSYCHO!

Anyway, moving on to cuter, but equally as sad news. I miss our cat, look at him, he’s so cute:

Seems like he had just awoken from his afternoon nap. When I woke up the other day, it was time to start my world-changing, outrageous outfit campaign. I call it the “Certainly Outrageous Clothing Knockout”. If you don’t know about this or why I’m doing it, you can just read up on my previous blogs. I started off slowly, because there are a whole lot of Tuesdays to come. So here is COCK No.1, including Michigan hoodie, Michigan shirt underneath and, the highlight of this selection, checkered Michigan pyjama pants: 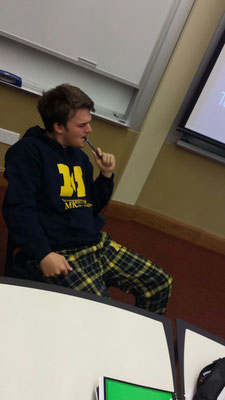 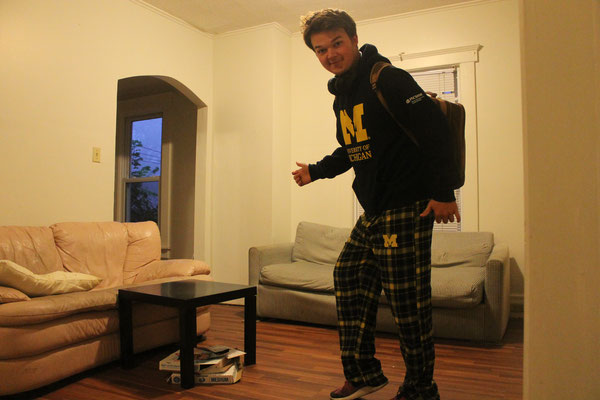 Nobody rated my clothing as being inappropriate. But I was prepared for that. They will start to recognize before they know it, because the outrageousness will only increase from here on out...

Great news at the end of the blog (the next one is going to be longer, since we go to Detroit on Saturday!). Remember when I applied for that art-blogging position? Well, I got the job. Apparently they liked my work and I can officially call myself a paid blogger/columnist now! How cool is that??: