Chicago, Chicago, I'll show you around... - Part I

Had I learned anything from my first Detroit visit? Certainly. Don't set your expectations too high. For my visit to Chicago I wouldn't expect much. But I was wrong not to. Let's dive right in:

Our travel group was quite diverse as China, England, Vietnam, Malaysia, South Korea, Thailand, the Netherlands, Finland, India and Germany were all represented in no more than 11 friends. Obviously we were in for a lot of fun and man, did we have it.

On the six hour bus ride I was contacted by my friends who had already spent a night in Chicago, that one of their friends was on the bus as well. Since I didn't know that person, I looked her up on Facebook and checked my surroundings by elevating my  head over the forest of headrests. Before I could spot her my phone rang:
"Hello."
"Hiiii, I'm looking for Marius", a shrill voice screamed in my ear.
"Speaking." I replied politely.
"It's only three weeks until the elections and we're looking for people willing to support Hillary's campaign. We believe you gave us your phone number at an event in Ann Arbor?!"
"Yes, I did. I gave it to you at the Bernie Sanders happening and ticked the box to not be contacted via text messages."
"Exactly, that's why we're calling."
"Yeah, because people who don't want to receive text messages would rather be called instead." I responded increasingly annoyed.
"They do? But you didn't tick the box for not receiving calls." she answered snappily.
"Because there was no such box."
"Of course there wasn't. If there was one, you would have ticked it." she said slowly, sounding like she thought I was an idiot.
I sighed: "What do you want again?"
"We need volunteers to make Hillary president, so Donald Trump doesn't win."
"How do I put this?" I murmeled "Ok, so: Just because I hate aids more, doesn't mean I would go out on the streets promoting cancer. You know what I mean, right?"
"Heh?" the voice seemed confused.
"Sorry, I just have a lot on my plate right now."
Her confusion turned to desparation: "If we don't get Hillary elected you won't have anything on your plate anymore soon enough!"
"Ok, I'm hanging up now, thanks for the call."
After hanging up I had forgotten about the friend on the bus. I was reminded just a few hours later when another, less annoying voice said:
"Hey, are you Marius?"

Anny was super fun. On the way to downtown Chicago, where we would meet up with the others, I found out that she has a blog similar to mine. Actually we decided to write an article for each other's blog in the near future, so be on the look-out for that. She liked photography, could draw and might therefore be involved in another project I have planned for the future. And she too was one of the lucky artists to be selected to write for the arts ink. blog I was accepted for just a few weeks ago. With all the talking she got us on the wrong subway, just to find out that it was actually the right subway, after getting on another subway, which then turned out to be the wrong subway. It was fine, though, because we got a taste of the real Chicago as a weird black man screamed at us, that he was a "white man" and would kill all the "bad" black guys in "the ghetto", although he seemed to have a racial terminology rather different from ours and I refuse to quote him any further. So, yeah...

Anyway, we found the others quite quickly and after getting a piece of cheesecake, all of us went to Michigan Lake to watch the sunset. Unfortunately the sun doesn't set in the East . So we watched the nightly skyline instead and it was absolutely magnificent. I am 100% certain, that there was no better place to be in Chicago at this time: 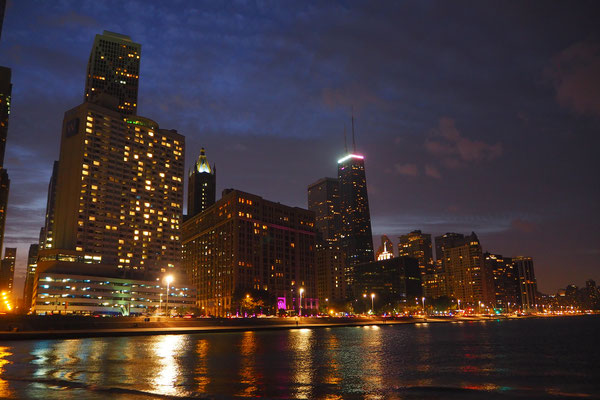 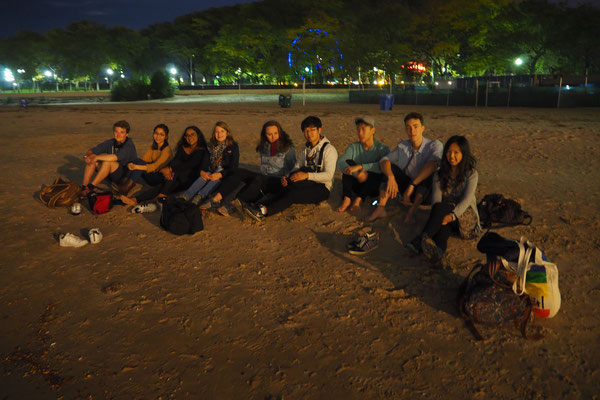 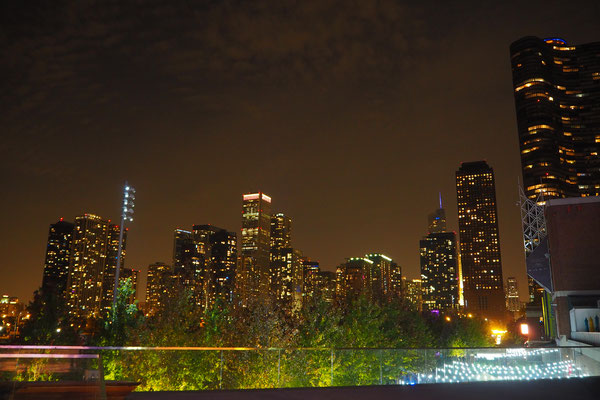 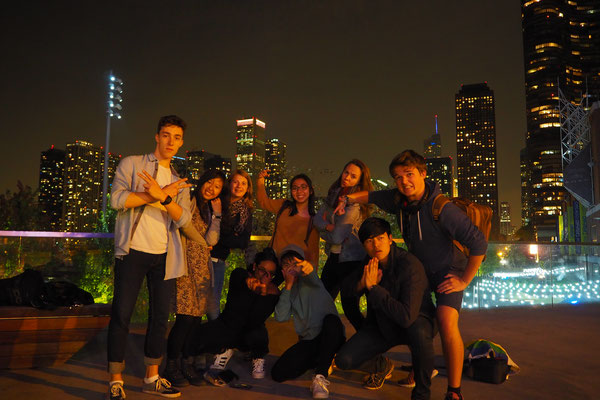 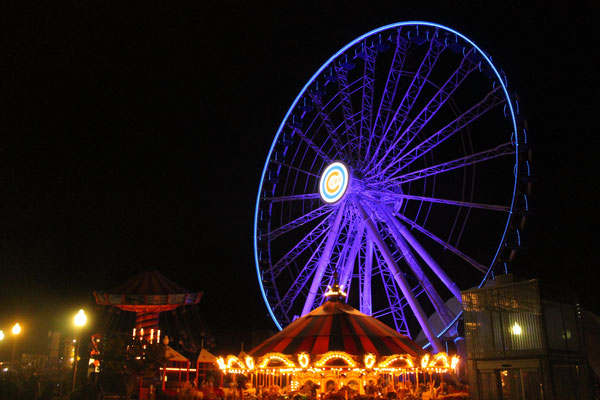 After admiring this stunning view, it was pizza time. Not any pizza, though, but Chicago Deep Dish Pizza. Yes, it is as good as it sounds. And different from conventional pizza, the cheese isn't on top but inside. Sounds weird, looks great, tastes even better. And the place - very well known for their iconic pizza - was absolutely original, too. We did have to wait to be seated for about 40 minutes, adding to the starvation we had suffered through upon arrival already (cheesecake was looong ago), but I guess the best pizza ever will always be the one you enjoy at the end of an exhausting day: 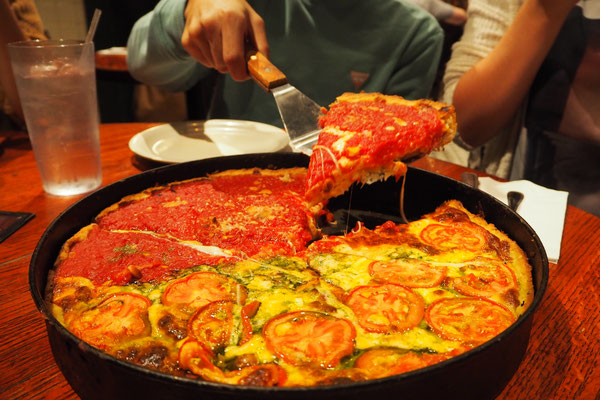 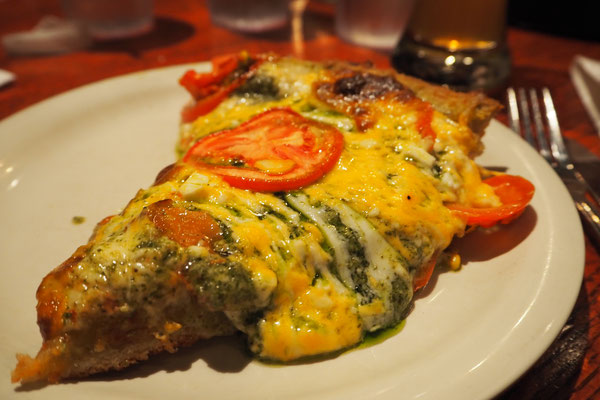 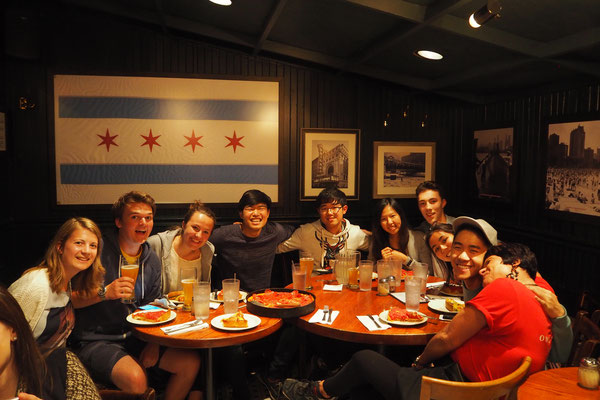 It wasn't exactly the end of our day, though. We did go home and eventually ended up playing beerpong and king's cup - this seems to be a student night's inevitable outcome - at our Airbnb. Since we were a group of internationals, we had a few asian friends among us. During the course of the night the stereotype of Asians not being able to process alcohol as well as Europeans and Americans was successfully refuted. They could have two entire beers before drifting off into an intoxicated delirium, a few of them didn't wake up from until the next morning.

Since we were 9 people in a one-bedroom apartment, fitted with two beds and a couch, some of us had to sleep on the floor. Everybody who wasn't extensively wasted took that bullet in the first night. 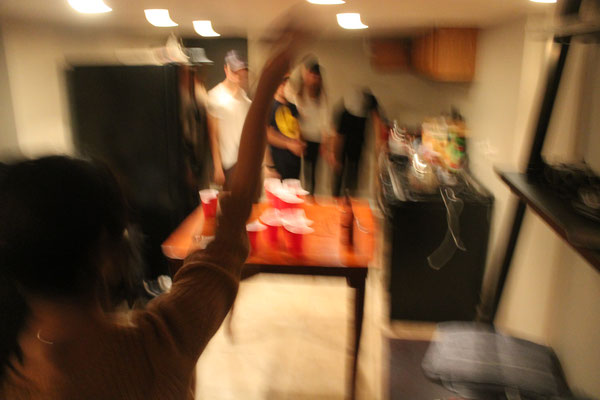 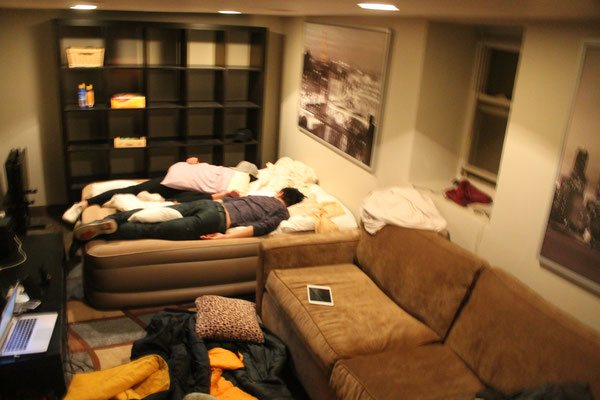 Let me tell you about the second and third day in Frank Sinatra's hometown in a second blog entry, since I don't have too much time on my hands at the moment and there is a LOT to tell you. I'll post Part II as soon as possible, so stay tuned...