One is a genius, the other's insane...

"You can't support the Yankees, though! They're kinda like Bayern Munich.", Jeremy said right before my first radio broadcast.

I had signed up to regularly appear on WCBN Sports (the sports division of the University's radio station) for studio events and live commentary. Because I don't follow, and therefore don't know anything about, american sports, the previous night was one single textual massacre in WCBN's group chat to recruit me to support a specific team. Everybody wanted me to support their team, so I was completely overwhelmed.

Jeremy, the Executive Director of WCBN Sports, had decided to resume this battle for my fandom on my first ever live radio broadcast. He and three other WCBN members made the studio feel more like an arena, when they started to make their cases. I have to admit, it was hilarous watching so many people fight over my support so intensely. The tension in the studio was more charged than at any of the presidential debates and people made better arguments, too. Fans even called in to try to push my favores towards their team. Naturally, all of this made my first broadcast a blast! I couldn't wait for Monday to be on the air again and again it was super fun. The studio looks just like you would imagine it to look like:

This is just in: COCK No. 3 happened today and for the first time people reacted. (If you don't know what COCK is, click here to find out) Many pedestrians looked at me quite intensely and with unconcealed curiosity. Some even laughed at my outfit, and rightly so: Today I was wearing cut up, colourful pyjama pants, a red shirt with tiny white flowers pattern and to top it all off, a doggy bow tie going along nicely with my blue and yellow skiing socks.

In class four fellow students told me they liked my pants (code for "why are  you wearing those hideous pants") and I'll count that as a first success on my way to making uni a place away from home again!

Of course I had to look sharp for COCK No. 3, so I went to an authentic american barbershop before, to get the most american haircut of my life. I felt like I was back in the... when were barbershops popular? The 20th and 19th century? Certainly. During the civil war? Yes. In the wild west? Sure. Basically they were always popular. So I felt like I was back in always. Everything was so original and... sort of old. Even my hairdresser Frank: 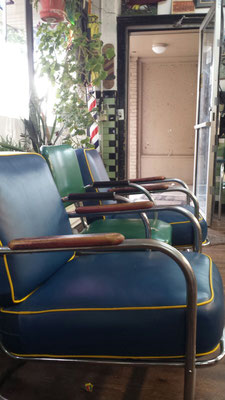 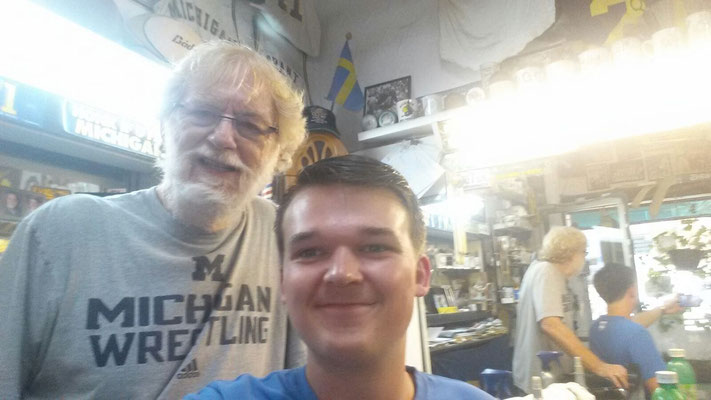 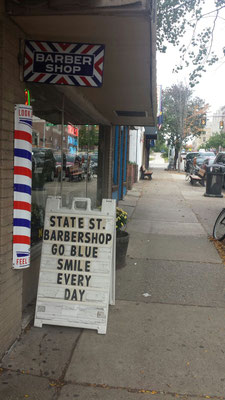 He only knew how to do one hairstyle, but man, did he nail it!

After the barbershop I felt like a proper American for a while. So when I saw a mouse scamper through our kitchen a little later, as if it was just another housemate, I didn't totally freak out. I was american. I was brave. I was free. Unfortunately I wasn't mice-free, so I went over to the mouse to ask it to leave, but it just didn't care I was there:

To understand my excitement about this, you have to know that we don't have that in Germany. Rarely can a mouse make it into a house ever, since we build our houses properly. But I was told in the US it wasn't uncommon to have a mouse hanging out under the fridge every once in a while. Eventually we named the mouse "Brain" and threw it the hell out of our house... It can take over the world for all I care, but not my house. Start paying rent and we'll find a place for you, buddy!

In other news, I applied for a slot at a very exclusive poetry slam at the Museum of Art in November. I doubt I'll get it, then again I doubted being accepted into this university in the first place, so why not try, right?

With a little bit of luck I will have my own radio show soon, too. If everything goes well you can enjoy my strange taste in music on a weekly basis. And what's really cool about it: Because I'm a newbie, they'll give me a shift between 12 and 6 am. That means that my friends and family in Europe can tune in for a good morning show!


Also, my first blog for arts inc. will be out this Thursday, so make sure you check that out.


Last but definately not least, I want to thank Vera for her lovely postcard. It really makes my day when I can make your day and the front side helps me to remember the most important slang words I might forget while not practicing german. So thank you so much, Vera! And give Rico a hug and kiss from me, would ya?! 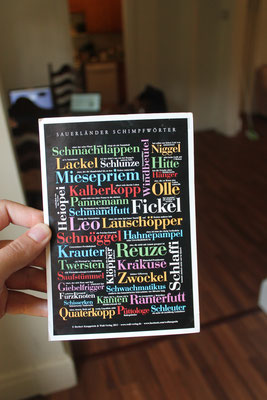 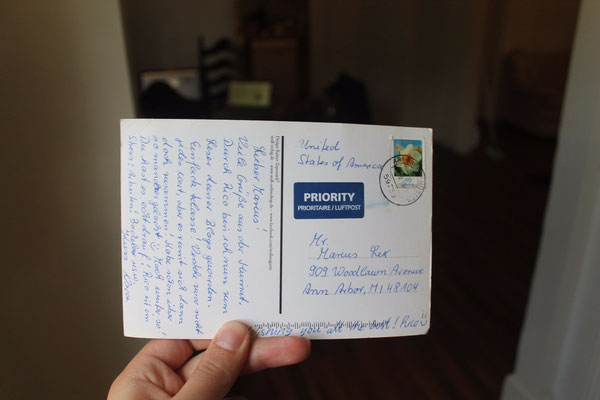 Guys, Halloween is just around the corner and as you may or may not know, it's a pretty big deal here. For the first time in my life I actually planned ahead and prepared a costume, parts of which will be essential to COCK No. 4 as well, so look out and be safe...